How to Reduce the Effects of Summer Solar Solstice

Posted by All About Blinds

Solstice is a Latin word for “sun-stopping” or “sun stands still”. During a solstice the sun stays in the sky for a 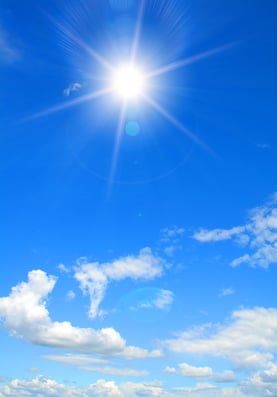 longer time than it usually does. This causes the sun to rise to the north of due east and set to the north of due west (and not at its usual points on the horizon). It occurs when the Earth’s axis tilts 23.5 degrees towards the sun, resulting in either the Tropic of Cancer in the north or the Tropic of Capricorn in the south to have the sun directly over them. This phenomenon is called summer solar solstice, when it happens during the summer time.

How Does It Affect the Day?

Summer solstice is considered to be the longest day of the year. It marks the beginning of longer days and shorter nights. The change in angle of the Earth’s axis causes the sun to shift its angles, making the sun travel over a much longer path which results in a greater amount of daylight. The excess amount of sunlight results in increased temperatures and more glare.

When experiencing summer solstice it’s much easier to protect part of the house that faces the south. Adding a wide overhang is a good way to block sunlight from entering through the windows when it is directly hitting the house. For the windows facing north, not much shading protection is required because the sun’s rays will penetrate them only in the morning and late during the afternoon.

It’s the windows to the east and west that will need more attention during summer solar solstice, since these will be the points through which the solar glare and heat will get in. To shield windows, doors or entry ways from the sun try planting trees in front of that area, or use shutters, fabric canopies or awnings to create shade. Another way of dealing with this is to reduce the number of windows in the western and eastern facing regions of the building and converting these parts of the house into insulating areas. For example, having a garage to the west and a closet and utilities room to the east, so there isn’t much need for windows in these areas.

These are two ways of shading windows – externally and internally. Exterior shades will reflect or catch the sun before it reaches the windows. Some of these shades are capable of absorbing most of the light and heat and some can be adjusted according to the angle of the sun. These shades serve as a form of secondary shading.

Interior shades are highly effective in blocking out glare and solar radiation that is prevalent during summer solar solstice. These shades include vertical blinds, venetian blinds, roll up shades and other interior window treatments. They simply reflect the light away to reduce the heat from building up inside and prevent the distracting glare from entering, as well. They are also an excellent way to maintain privacy and provide a great look for windows. Plus, they can be easily adjusted or rolled up when the sunlight reduces.